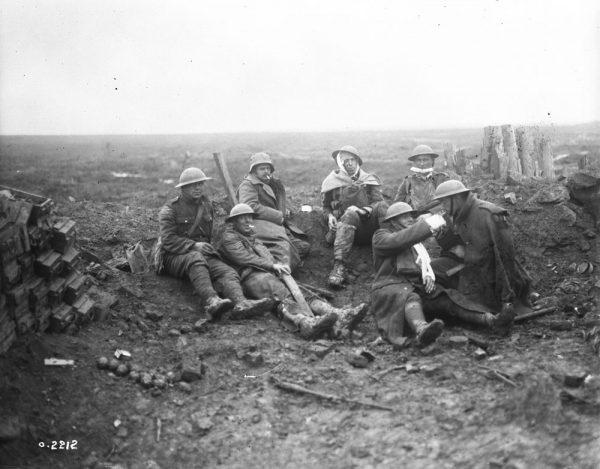 I’ve written on the theme of World War One often; it keeps calling me back to the trenches, and pondering the 11th hour of the 11th day of the 11th month.

Perhaps it’s because I’m a “November baby,” feeling affinity with the first armistice day. Perhaps because as a woman’s, social, colonial/commonwealth and Canadian historian, this time period is a demarcation zone. Perhaps because my father was career military.

Or perhaps, because my great-uncle Earle, on October 26, 1915, aged 18 enlisted and served in B Company of the Royal Canadian Battalion, Canadian Infantry. On October 31st, 1917, during the 2nd battle of Passchendaele, he went missing; his body was never found. His is one of 55,000 names listed on the Menin Memorial Gate in Ypres, France. Those 54,999 others whose bodies were never found in “no man’s land.”

And then there is the tale of his brother, Grover, who entered the war in 1914, and returned home in 1919 – for many the war was over on that 11th day, but it would be months before they would reach home. As I wrote before: On a foggy night, eight years later, he and my great-grandfather died when their wooden schooner was sliced in two by a metal-hulled steamer. A family grave marker commemorates both events. Wooden sailing ships and metal steamers meeting in the fog: an adept analogy for World War One?

When I revisited the family grave a few years ago, I took pictures of the four sides of the plinth. Somehow, photos showing the side commemorating Earle were deleted. Taking a chance by binging his name and World War 1, I came across the Great War Project, and several other sites which contain information on his service record, the date of his death, and where his name is inscribed on a monument and in a national book of remembrance.

When I hold my minute of silence on the 11th hour of the 11th day of the 11th month, I will be thinking of Great Uncle Earle. Thinking of the other 55 to 65,000 Canadians, including nurses, who lost their lives on WW1 battlefields, in field hospitals, and away from the front.

And mark the passing of Canadians,  Americans, and people world wide who lost their lives to our most recent war: the war on COVID-19.

#lifeinthetimeofvirus, History, In Memorium, life in the time of virus, remembories, requiem