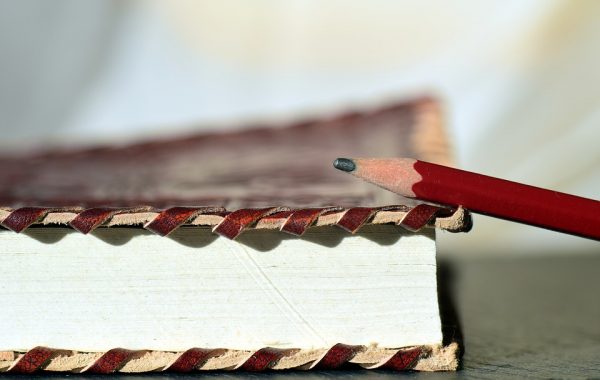 She groaned, perhaps as much as the over-burdened shelving did. Her mother was an accumulator of half-written journals and diaries; ancient address books stuffed with old photographs; the half-completed scrap or memory book.

Her mother began these projects with a feverish intensity. But, like her relationship to her daughter, these commitments might last a month, or an hour. “I will get back to . . .” she remembered her mother’s voice lazily drifting off.

As a child, she would get herself a cold cereal breakfast before school. No point to look in on her mother. The woman, sleep-addled, would be propped up in bed, her pen hovering over a blank diary page, “What you first write determines your day,” was her mother’s mantra. And so, she would return from school to find her mother still looking for the words that would allow her to get dressed and on with things.

Or, during the feverish times, her mother would scribble for hours, sitting at the battered kitchen table, barely noticing the cup of coffee or glass of wine her daughter fetched to draw the woman’s attention to the now. “Writing is the soul’s sacrifice” became her mother’s mantra.

When it was scrapbooks, she requested newspapers and magazines – the daughter dutifully stole them from door steps and mailbox boxes. Gutted, they remained in heaps around the living room. The daughter sidestepping her way through to the kitchen for milk and cookies.

So, the daughter countered questions at school with “My mother’s a writer. She publishes her books under different names.” Or, “she does television scripts, you know episodes of” whatever the most popular shows were. Stretching things, her mother was an academic researcher amassing information gleaned from the everyday: “Life is time’s credit.” you know. As she grew, her explanations and excuses became more sophisticated. None were exactly lies; merely embellishments, or what her mother might achieve if only . . .

At 16 or so she gave up and left home doubting her mother noticed her absence. Then, her mother took the same feverish interest in having “life-partners” as her new projects. But her enthusiasm dissipated, often after than man barely had time to hang his shirts in the closet.

The daughter did keep a tenuous line back to her mother. She noted the series of phone numbers scratched out and attached to the fridge. These marked the changes in the daughter’s life. Different, unpredictable ones. Even her mother’s scatteredness had an order to it.

There had been the panicked call last week from a neighbour. Her mother had fallen god knows when and was now in an ICU unit. Could she come? The daughter took a look around at her life and said, to her regret, okay.

Now, here she was surrounded by all her mother’s failures. She spent the time allowed next to her mother’s bed, wondering if this was the first time the woman wasn’t either intently journaling, scrapbooking or fading away from her “projects”

Absently, she pulled out one of those old “my diary” books with the tiny lock and key. Like she got each year for her birthday. Writings from before her birth. Flipping through the pages, she was startled to see each day neatly filled in. These early “tomes” featured a childish thoroughness her mother never displayed later.

The ancient address books revealed another side to her mother – she had no photographs of her own childhood except for the occasional class picture. Once, her mother had been intent on recording the world around her, in Polaroid and Kodiak clarity. There were even old-school “selfies” – time tripped photos of her mother: smiling; silly posing by her self or surrounded by friends as she never was during the daughter’s childhood. All she experienced was the monk-like reclusiveness her mother wore like a shroud.

The daughter was gripped with the strangeness of it. What was the catalyst for these seismic shifts? Her birth? Or . . . With the same feverish intensity her mother displayed, the daughter tore through her mother’s stash.

She found the tone and thoroughness changed, fading like chalk drawings on sidewalks once her mother discovered drugs – LSD in particular. Then the entries became scattershot, skittering across the pages, often undated. Even the handwriting shifted, as if her mother were two people: straight and drugged out.

watched the music flow in notes from the stage; crazy like I can’t read the stuff but all clefs and semi-quavers; man best concert ever

damn; too wild; cherry nixed going to party so sat round her place; too trippy for words; jon showed up; dropped froggy; all green and purple

following me, like malevolent shadows. crazy. no faces just eyes.

peace. serenity. giving into madness. waiting for the birth pain. keep her. my girl. my petit mort.

She couldn’t truly reconcile if her mother’s mental illness came from the drugs; her LSD experiences. Or if always there, hidden by a façade of normalcy. Like hers. The inheritance of generations maybe. The inner demon of writing it all down. Each day determined by the first words.

She sighed. Tomorrow she would listen to the hum of machines; watch her mother’s heart beat on a monitor. Make the decision. Save nothing except for these stories of her mother’s life.

A stream of consciousness, free-fall, free write prompted by the mlmm music challenge based on the song, LSD-25, by The Gamblers.

Must have still had the word list from mlmm’s same same but different Saturday mix prompt rattling around because, when I read over the soc, I recognized some of those darn synonyms. So, I did my editing lightly, looking for words to shift or bolden.

Note: I was generous in my meaning/usage, thus a synonym allowance, evading certain terms while amassing others! (nod, nod, wink, wink: “A nod’s as good as a wink to a blind bat” Monty Python’s Flying Circus, “Nudge, Nudge” skit)