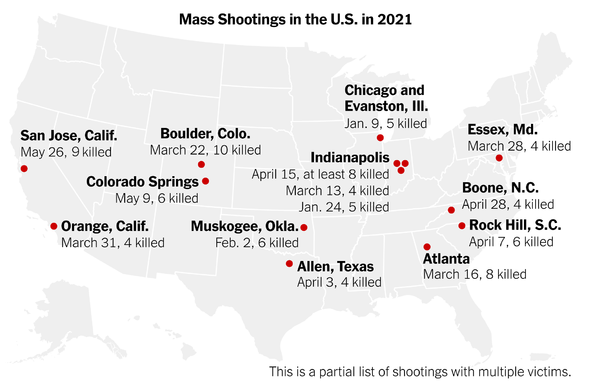 from the New York Times: map doesn’t include the shooting in Florida on Saturday: 2 killed; 20 to 25 injured.

“The Gun Violence Archive, which defines a mass shooting as one with four or more people injured or killed, not including the perpetrator, counted more than 600 such shootings in 2020, compared with 417 in 2019.

That carnage has continued into 2021, with at least 232 mass shootings as of May 26. (Including Wednesday’s shooting in San Jose, Calif, the archive, a nonprofit organization, has counted 15 mass murders, which it defines as four or more people killed, in 2021.)”

from “Mass Shootings in the United States in 2021 – The New York Times (nytimes.com)”;

This weekend, when we stop to remember those who fell in war (military and civilian), let’s think, too, about the victims of gun violence. Wars seem finite; sadly, gun violence seems infinite.