The wordle challenge this week is to:

find a poem or song you love and use as many words as possibly can from it. Make sure to share the original for comparison or at least a word list. Make sure that your poem is nothing like the original. mindlovemisery’s menagerie bonus wordle

In honour of international women’s day (march 8), I chose the poem/song, Bread and Roses

BREAD FOR ALL, AND ROSES, TOO’ A political slogan attributed to speeches by American activists, Helen Todd, and later, Rose Schneiderman, which inspired a poem by James Oppenhain published in 1911. It was set to music by various composers, having been rediscovered after WWII. This version is based on the melody written by Margarita Mimi Baez Fariña in 1974. women of the world, youtube 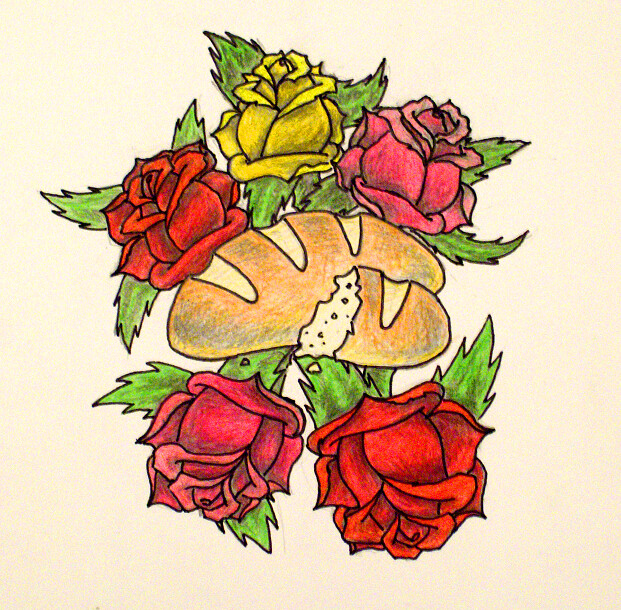 “Bread and Roses” continues to symbolize women’s struggles for equality.

Suffragist and labour activist Helen Todd used the analogy in a speech advocating for women’s suffrage in 1910:

Not at once; but woman is the mothering element in the world and her vote will go toward helping forward the time when life’s Bread, which is home, shelter and security, and the Roses of life, music, education, nature and books, shall be the heritage of every child that is born in the country, in the government of which she has a voice.

Invoking Todd’s shorthand for the head/heart of the women’s movement, James Oppenheim published his “Bread and Roses” poem in the December 1911 issue of American Magazine.

As we come marching, marching, in the beauty of the day,

Are touched with all the radiance that a sudden sun discloses,

As we come marching, marching, we battle, too, for men—

For they are women’s children and we mother them again.

Our days shall not be sweated from birth until life closes—

Hearts starve as well as bodies: Give us Bread, but give us Roses.

Go crying through our singing their ancient song of Bread;

Small art and love and beauty their trudging spirits knew—

As we go marching, marching we stand up strong and tall

(original: As we come marching, marching, we bring the Greater Days—

(can end with: Our lives shall not be sweated from birth until life closes

note: the song lyrics use “go” rather than “come” in some lines

Female textile workers walked off their jobs at the Everett Mill in Lawrence, MA on January 11, 1912 demanding better wages and working conditions. The next day, workers at the American Woolen mill joined the walkout. The images evoked in Oppenheim’s poem became synonymous this strike action. As well, the strike forged links and united workers from different industries and immigrant communities.

The Bread and Roses strike was won by the Industrial Workers of the World (an industry-wide “radical” union acting as spokespeople for the strikers) with workers seeing an increase in their wages and improvement of working conditions, eventually throughout New England. Images from the strike of police brutality, especially actions against women and children, lead to Congressional inquiries including living and working conditions. But victory came with the cost of lives, including a woman striker, Anna LoPizzo.

“Bread and Roses,” has been set to music several times, and in the 1930s was an anthem for women providing assistance and support to strikers on the picket line. In 1974, singer-songwriter and activist, Mimi Fariña, set the words to new music – the familiar refrain continues to symbolize women’s struggles for equality

My wordle is just a poetry fragment; incomplete — like women’s struggle for equal rights and social justice.

ancient images rising and subsiding with your every starving, sweated breath

word list: no; beauty; the; radiant (form of radiance), heart[s]; roses; ancient; rising; starv[ing]; sweated (we are allowed as few as ten)