howlin’en: seeing double is something to howl about

Perhaps you’re reading this under a blue light — blue full moon light, that is!

And, as the second full moon in a month is considered to be a “blue moon,” any full moon on howlin’en is blue!

Eugene Shoemaker‘s work on impact craters affected everything from NASA’s Apollo missions to the dinosaur extinction debate. . . . Shoemaker studied the moon rom afar, but he often dreamed of climbing into a spacesuit and walking on its surface. Sadly, he never got the chance; Addison’s disease kept him from becoming an astronaut. But in 1997, some of his ashes were laid to rest near the moon’s southern pole. That made him the first — and to date, the only — person to ever receive a lunar burial. On his urn, from Romeo & Juliet:

And, when he shall die,
Take him and cut him out in little stars,
And he will make the face of heaven so fine
That all the world will be in love with night,
And pay no worship to the garish sun.

from: how stuff works

🌕 The term “lunatic” was derived from the Latin, “lunaticus,” which means moon-struck. The general belief was people were made mad by the moon, and it’s effects were worse when full. (Middle English lunatik, from Old French lunatique, from Latin lūnāticus, from lūna, moon)

🌕 Although the idea manifests itself differently in various cultures, belief in werewolves is found around the world. Some werewolves are shapeshifter changing at will; others, having been bitten by a werewolf (or inherited the condition) change under the influence of a full moon. The word werewolf is derived from Old English.

🌕 The psychiatric condition in which a person believes they are is a wolf is lycanthropy. Another name for werewolf is lycanthrope. The etymology: early 17th century: from modern Latin lycanthropus, from Greek lukanthrōpos “wolf man.”

🌕 Murder, mayhem, aggressiveness in animals, motorcycle accidents: many people believe there is a definite increase when the full moon casts it’s gaze.

Why not join the Addams family in a little moonbathing this evening. 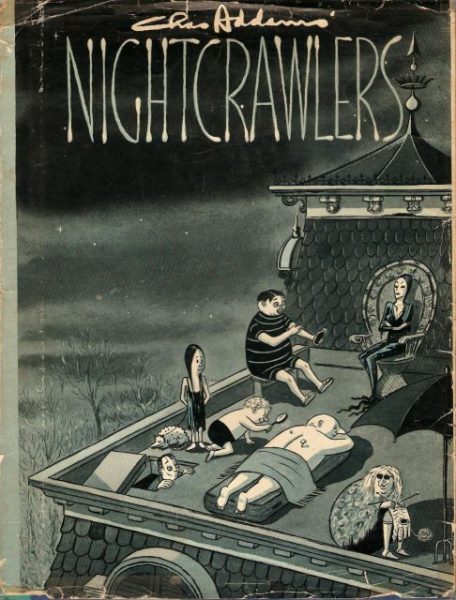 Psstt: another bit of the madness of moons: Nightcrawlers, one of my father’s Charles Addams books, was published the year I was born. He didn’t get a copy til later, otherwise, my name might be Morticia or Wednesday — my father always did call me “Cousin Itt” . . .