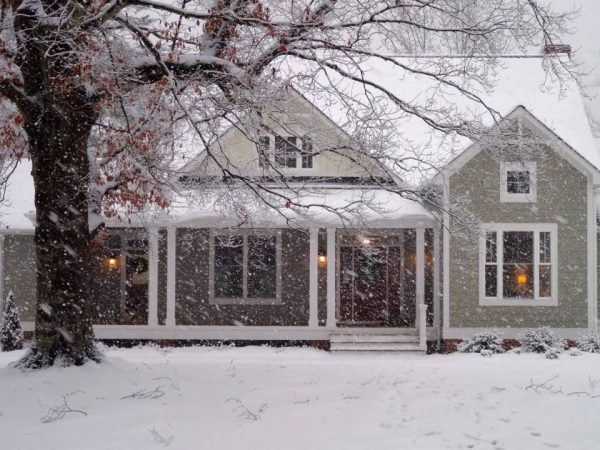 In her mind, the old battered shovel was weaponized, wield like an ancient sword and shield.

“Every New Year’s,” she muttered, her back straining under the weight, “there’s a damn storm.” And, her neighbour, son a member of the town’s constabulary, never had to move her vehicle.

So, the plough swung wide, leaving the stormy detritus of the long curve in the road dumped right in front on her door-yard. Today, as deep as the top of her high rubber boots.

“And, if I laid down and died in, it, there would still be a few inches between the top of my head and the high road.”

And surely ye’ll be your pint-stowp!
And surely I’ll be mine!
And we’ll tak a cup o’ kindness yet,
For auld lang syne.

Not that she was going anywhere – she didn’t partake of the Eve parties or the Day’s Levees. But, public walkways had to be cleared or the sheriff came a’calling, and sometimes the postal person showed up. Sometimes.

Turning to push in the other direction, she narrowed her eyes. Even her glasses didn’t protect from the singing, stinging wind. Her hood kept pushing her head band down, skewing her glasses and her vision.

We twa hae run about the braes
And pu’d the gowans fine;
But we’ve wander’d mony a weary foot
Sin auld lang syne.

She was coated and stiff after an hour with still only half her ploughed in door-yard cleared. She could get one of those blowy horns that arched the mess in various directions, but she remained old school. The roars shattered the silences between the keening of the winds, cracking the moonlight.

We twa hae paidl’d i’ the burn,
Frae mornin’ sun till dine;
But seas between us braid hae roar’d
Sin auld lang syne.

“Damn New Year’s,” she cursed. “Always, always a storm. And getting worse!”

She shuffled into her cottage to shake our her cloak, gloves, and knock the accumulation off her rubber boots. She settled on her bench before the fire, stirring up the lowering embers. A  hot cup spiked with that dark-roast coffee liqueur wouldn’t be a bad idea, either.

And there’s a hand, my trusty fiere!
And gie’s a hand o’ thine!
And we’ll tak a right guid willy waught,
For auld lang syne.

Here, New Year’s only happened every 8 cycles or so, when the Fiery Mountains spewed forth it’s horde of dragons and ash. But lately, the New Year’s circle was getting shorter.

A princess, forced to shovel during a dragon blizzard could become troublesome, indeed. She tends to push as much of the ash and scale as she can under and behind her neighbour’s wagon as she could.

So troublesome as to take a week to make a tale weaver appearance and NOT in the intended story (which has yet to be finished; where is that frog when you need him, “Kermie, oh Kermie.”)