I was going to shorten it, but decided to leave it long. Don’t feel like reading long, then choose a shorter response to enjoy.

In January 1998, we were subletting a tiny apartment in the once attic of a 19th century house in Eastern Ontario while I finished my contract instructorship with an university. On the night of January 5, the weather folks were calling for “significant” freezing rain; this was the beginning of the ice storm of 1998 that impacted Ontario east to Nova Scotia, upstate New York, and Maine.

By midnight, we could hear the crashing of ice-weighted limbs and trees. Over our tiny skylight, trees swayed under their load of ice, rocked by the wind. By then, the power had been out for several hours, and we moved our mattress towards the door to our apartment and waited for the thunderous bangs of shattered trees to stop, the ice-pellet rain to let up, the dawn to come.

Off in the direction of the university, we could see an eerie glow in the sky (all else was blackness). As the university shared a power plant with the local hospital, we thought the light must be coming from the campus.

With first light, we were able to begin to comprehend the massive impact of the storm: the huge tree from across the alley now had been sheared in two. Electrical wires hung like unclasped necklaces down to the ground. Our little car, parked out back, was incased in ice and surrounded by walls of sticks. A much larger branch, caught up in the telephone wires that were were still strung to our house, dangled over her roof. But nothing, it appeared, had actually made contact with the car.

Unnerved by the storm, and the continued crash of falling branches/trees, cold, and coffee-less, we decided to trek to my office just in case the power was still on in that building on campus. On a good day, it was a short, pleasant walk through a park, down a couple of streets, then a quick trip across the campus.

We packed two knapsacks with supplies (the department had a small kitchen area with bar fridge, microwave, two burner stove, and sink), and opened the house’s front door onto a scene from the aftermath of a bomb attack. The street was almost impassable on foot, littered with thousands of branches, shattered tree trunks, smashed and flattened cars. Everything was coated with a thick patina of ice. 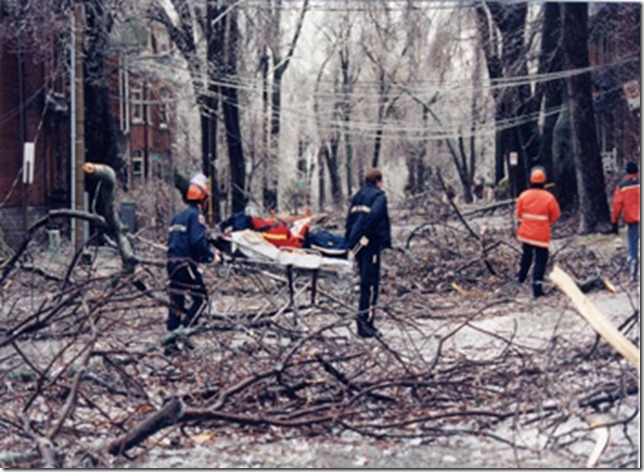 There was silence, stillness; except for the continued snap, crash, crackle of ice-weary branches hitting the ground, shattering icecoats into a million pieces. We walked down the middle of the street, each step so carefully taken to avoid debris or falling.

Often ice on winter bare trees makes for a show of diamonds and glitter. Here, it marked hunchbacked young trees frozen to the ground. Ancient trees ruptured. Light poles and telephone poles drunkenly listed to one side or the other. Transformers exploded and burnt black. It was the landscape of nightmares and war zones.

We made it to my office, warm and brightly light, and basically moved in for the 3 weeks it took to get the power back to our apartment; even longer for phone service. We slept on piles of blankets on my office floor, cooked our meals in the kitchen area, listened to the radio, and made treks out into the frozen world – the weather remained cold, giving no chance for surfaces to lose their straight jackets of ice.

We rescued our car, branch still dangling over the roof. As if she realized it was her only shot at freedom, the little car (with a running start) made up and over a large pile of branches blocking the escape route. She had become entangled in some downed wires on our first attempt. We parked her in a parking lot near my office that had NO trees within falling distance.

That evening, heading back to our new home from downtown having run errands, we noticed candles flickering in the window of a small pub we sometimes frequented. Exhausted, we tried the door: yes, they were open with a generator out back helping to keep the beer cold, and allowing the kitchen to offer up two choices for dinner: chili with garlic bread or a hot turkey sandwich with cole slaw. The much coveted large armchair seats in the front window were vacant – most folks had either left town or were hunkered down – and we had two of the best meals we’ve ever eaten. Not by the quality of the food so much as the quality of the experience.

We were safe, our car was safe. Leaving the taps open seemed to have saved the plumbing in our apartment from freezing and breaking. We were surviving the great ice storm (even if we didn’t yet realize how long it would be until life returned to normal. And, for many folks in the country, it was months, not weeks, til the power came back on).

We now rent a tiny house under the sweeping branches of tall maples and oaks. In the past ten years, these trees have survived two major hurricanes, one super-storm, fronts passing through with wind gusts at 55 mph +, directly overhead and close by lightening, and ice storms. Ice storms turning the trees, bushes, and cedars into patrons at an grand ball draped in light-catching diamond necklaces and earrings, The magical glow of a thousand sparklets of light.

But ice still is ominous; weather forecasts of measurable sleet, freezing rain or ice, still frighten me with images crashing limbs and broken bones. I forgot how fragile my bones have become, and the way in which a simple fall might not be. Early December 2015, I tripped on uneven sidewalk slabs (in my “world, most sidewalks are that way) resulted in breaking the tip of the greater trochanter at the top of my right femur. When a month later the pain was worse, got it checked out to discover the break.

While I still see the beauty in the sun on an ice-coated world, the need to tread carefully, and to keep fingers crossed when I am taping on my keyboard and hear the unmistakable scream of a splitting branch or breaking trunk means that my experiences from the ice storm of 1998 will remain fresh in my nostalgia daydream/nightmare “trunk”

“The weather channel and local radio are already calling the Tuesday into Wednesday oncoming storm, the storm of the decade. We might get more than a half inch of ice build up from hours of freezing rain.

The giant oaks whose trunks “seem” solidly placed in the neighboring yards spread their branches looming/lurking over our little house. High winds, thunderstorms, and heavy snow make me nervous; I have images of branches slicing through the attic.

But, calls for any amount of freezing rain sends shivers and I get unnerved all over again. My memories of the Armageddon-like landscape are still very fresh in my mind. This summer I came across a newspaper photo of our street after the storm we had kept; it was every bit as hellish as I remember. I’m not sure how I will handle the next couple of days, but at least we don’t have a skylight . . .  yet.”

© Lorraine; images: various news and other sources via bing