mlmm Tale Weaver for December 1, 2016 — A Place of Healing: Sanctuary 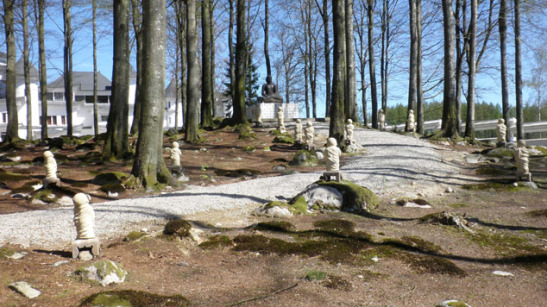 I stumbled through the dense pine forest right into Meditation Pool I. The jolt of cold water brought me back from the hallucinations born of seeking sanctuary – days on the run without food, and scarce water. Could that be a voice above the surface calling …

“Ms. Michael, Ms. Michael. at last. We were concerned when you appeared to have wandered off at the airport.” There was a pleasant soothing sound to the speaker. “Jenkins, I’ve found Michael in Med. Gard. 1,” a little less smoothly into the walkie-talkie. “A bit feraled but alright.”

I was expertly whisked away to a suite of rooms with matching soothing colours of wall, linens, vases of flowers with soothing perfumes. Hopefully, Ms. Michael and I were of similar look and build so I might continue the guise that I was her.

The staff had unpacked her luggage – now empty shells tucked into the closet back. Clothes not my taste, but of my size. Documents revealed a passing resemblance, with perhaps a change in weight, glasses and hair style accounting for anomalies.

I was the other empty shell sucking up Ms. Michael as I found her: no infinity scarves; very little makeup; only natural lemon scented skin products; ultra soft cotton clothing – woman must be a fabric softener addict – flat shoes with wide, broad toes. Pads of yellow pad, lines oriented horizontally like a computer screen, pens, post-it-notes in at least 10 different shades, a state-of-the-art Surface note book, and smarter phone. Lots of info there to to harvested.

Literature tastefully placed around the room suggested I was at a healing retreat – what was Ms. Michael healing from ? – for a two week stay. A itinerary had been left – going by my survival watch, she was missing for three days. No wonder the relief at finding me floating in the meditation pool.

It appeared that people went missing from the retreat – everything was set for Ms. Michael to arrive – without notifying the authorities, friends or families of the person in question. Strange. But perhaps the idea was no contact with the outside world. I turned on the cell phone – boon if it worked – to discover no wifi hot spot to go with the hot springs. I was sure the same would happen with the notebook. Useless vestiges of the outer world brought into the inner sanctum.

Just the sort of place I might find sanctuary: gather enough intel to be Ms. Michaels for awhile; long enough to recast myself; and relax and sleep with just one eye open.

As to the real Ms. Michael – I hope she found the sanctuary she was actually seeking. I’d mediate good thoughts for her during my session in an hour.

Written for Tale Weaver: A Place of Healing (1st December, 2016)